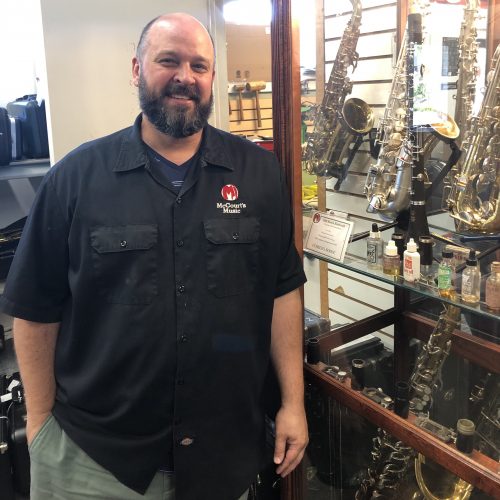 Brian was born and raised in Dearborn Heights in a music household. His father, David, was a band director in the Wayne-Westland Community Schools who also ran his own music store, first out of the basement of their home and later, in a store front in Garden City. Brian began playing the saxophone in third grade, and it was at his father’s bench that he apprenticed to become a band instrument repair technician, specializing in woodwinds. He has been in the music business for over twenty-five years, serving every role from salesperson to repair tech.

When it comes to repair, he loves diagnosing the problem, but it’s the details of repairing that keep him interested. He performs high-quality repairs and has developed an excellent reputation for his work.

Besides listening to all types of music, he enjoys barbecuing, traveling, playing with his dogs, and watching sports.  He also has a soft spot in his heart for animals in need of rescue, having fostered puppies and dogs, and currently has two dogs, and three cats. His long-time girlfriend is very tolerant.